ANOTHER ROUND Wins Multiple Robert Awards Including Best Danish Film

By topkapi_editor February 9, 2021 No Comments 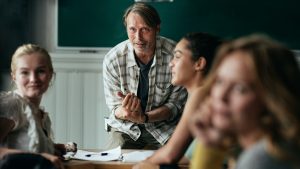 After last week’s Golden Globe nomination for our Danish co-production ANOTHER ROUND we are given yet another reason to celebrate. The film has won this year’s Robert Awards for Best Danish Film, Best Director, Best Male Lead, Best Original Screenplay and Best Editing. The Robert Awards are seen as the Danish equivalent of the Oscars. This year the festival held its 38th edition.

The film has not only been nominated for a Golden Globe Award for Best Motion Picture – Foreign Language; it is also Denmark’s official 2021 entry for the Oscars and has been honoured with the official selection label at both Cannes Film Festival 2020 and Toronto International Film Festival 2020. The film has also won the awards for Best Film, Best Actor, Best Director and Best Screenwriter at the 33rd European Film Awards. In addition, it was granted the award ‘Prix des Cinémas Art et Essai in France’, the LFF Virtual Audience Award for ‘Best Film’ at the BFI London Film Festival 2020 and the Silver Shell for ‘Best Actor at the 68th San Sebastian Film Festival.