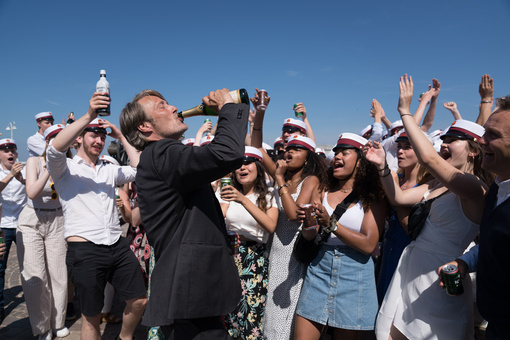 Thomas Vinterberg’s drama ANOTHER ROUND produced by Zentropa continues its world-wide success story among buyers, media and festivals. The film’s leading cast has won the Silver Shell for ‘Best Actor’ at the 68th San Sebastian International Film Festival. This year, the Silver Shell has been awarded to all four Danish actors: Mads Mikkelsen, Thomas Bo Larsen, Magnus Millang and Lars Ranthe.

The Best Actor Award was first presented in 1953 and has previously been awarded to internationally acclaimed actors such as Javier Bardem, Ian McKellen, Michael Caine, Al Pacino, Nicolas Cage, James Stewart, Jack Lemmon, Kirk Douglas, Marcello Mastroianni and Sidney Poitier. The only other Danish actor to have received the award is Ulrich Thomsen for the film BROTHERS in 2005, and it is only the third time that the award has been presented to several actors from the same film.

‘I have placed steep and difficult demands on these four actors. In return, they delivered gold. On every shelf. An award they must have. And hopefully many more!!’