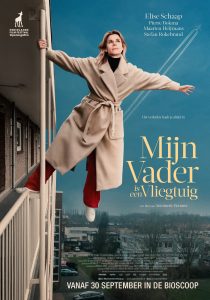 We are excited to announce that on Friday, September 24, 2021 MY FATHER IS AN AIRPLANE will open the 41st edition of the Dutch Film Festival. Author and director Antoinette Beumer directed the film based on the eponymous novel, with which she made her debut in 2018.

MY FATHER IS AN AIRPLANE tells the story of Eva, a woman who seems to be living a perfect life. When her mother unexpectedly dies, Eva’s life turns out to be built on secrets and lies. The fear of losing her mind, just like her father who has been living in a mental facility for many years, becomes more and more threatening. Eva starts a quest for her past to face her demons.

MY FATHER IS AN AIRPLANE is directed by Antoinette Beumer and written by Maaik Krijgsman.  The film is produced by Topkapi Films and coproduced by the VPRO.