By topkapi_editor February 3, 2021 No Comments 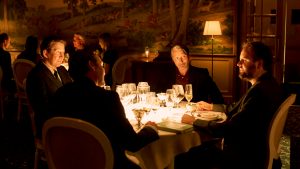 We are extremely proud to announce that our Danish coproduction with Zentropa Entertainments ANOTHER ROUND has been nominated for a Golden Globe award in the category Best Motion Picture – Foreign Language.

ANOTHER ROUND is produced by Sisse Graum Jørgensen and Kasper Dissing for Zentropa Entertainments in co-production with Film i Väst, Zentropa Sweden, Topkapi Films and Zentropa Netherlands. The film is made with support from the Danish Film Institute, TV 2 DENMARK, Eurimages, Netherlands Film Fund, Svenska Filminstitutet, Netherlands Film Production Incentive and the MEDIA Programme of the European Union.